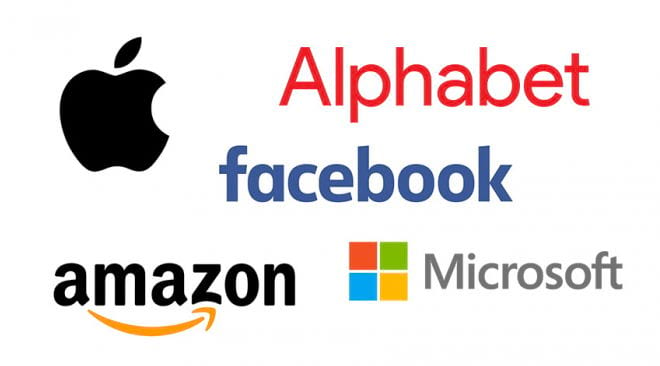 Who Are The Top 5 Tech Giants in The World?

When you first hear the word tech giant, what comes to your mind? Of course, not sci-fi robots that can kill humankind. Instead, these tech giants are capable of evolving humanity for the better. Tech giants are the colossal names in the tech world. Each industry has a few supreme entities which tend to dominate in that vertical.

The technological world has a few big names that influence the industry. These companies would have performed radically in the industry so that they can bag a superior spot. Each tech company put in the list of tech giants has something different to offer to its customers.

Not only in terms of their performance, but these tech giants are also measured on the basis of their revenue. So, when you hear about the top tech giants of the world, you know they have a staunch revenue flow to maintain their position. In this article, we are going to discuss the biggest tech giants in the world and what makes them so.

The pandemic has shaken the foundation of every industry. Many companies had to completely shut down due to bankruptcy after the lockdown. Irrespective of the uncertainties that were thrown by the pandemic, there were a bunch of digital marques that continued to thrive. Yes, we are talking about the top names in the tech industry who were pandemic-proof and showcased a remarkable performance both in terms of revenue and reach. Let’s take a look at the world’s biggest tech giants who proved their worth amidst the chaos in the world.

Undoubtedly, Apple came on top of this list; the company has been thriving in the tech industry and setting new grounds since its launch. It was launched back in 1976 by Steve Wozniak, Steve Jobs, and Ronald Wayne. The company is headquartered in California. It has become the most valuable tech company in the world, holding a capital of 1.90 trillion dollars. Also, Apple earns the highest profits in the tech industry, with average revenue of $260.2 billion.

Another feather in Apple's cap was when it was named the most valuable company until Saudi Aramco made its way into the list. Apple Inc manages to become the top tech giants in the world and definitely have its millions of loyal fans based around the world. Apple has to offer a range of elite tech products that are unmatched in the industry. The diligent work on the products has bagged Apple a place in the world's most successful and admired brand.

Apple started with its range of computers and PC. However, the iPhone was a tremendous success of all time for the company making Apple the wealthiest company in the world. Today Apple has extended its products’ range to smartwatches, tablets, smartphones, and more.

A company that can give cut-throat competition to Apple is undoubtedly Microsoft. It is no doubt the second largest tech company in the world with a net market capital of $1.6 trillion. The company was founded in 1975 by Paul Allen and Bill Gates. They started by creating packed software to design a PC that is intuitive and user-friendly. The company is headquartered in Washington. Microsoft is indulged in software development, cloud computing, hardware electronics, etc.

Since its launch, Microsoft has extended its services and products to flourish in the market. Today, Microsoft has been offering its dedicated operating systems for computers, smartphones, smart gadgets, business tools, games, business apps, and more. Though Microsoft has always focused on software development and fields related to it, it has currently shifted its focus to other capabilities. Microsoft is bringing innovative technologies like cloud computing and artificial learning to ensure its position in the market as a tech leader.

The company is currently bagging profit share from the cloud computing revenue by developing a dedicated cloud platform, i.e., Azure. It was a groundbreaking development for Microsoft that has skyrocketed its popularity. Also, Microsoft owns the social networking platforms, LinkedIn, and Skype. In the coming years, we can expect some radical and reformational changes in the tech industry brought by Microsoft.

Started as a small delivery service in the USA, Amazon is now rated as the third biggest tech company in the world. Not just the whopping capital of $1.59 trillion. Amazon also holds the record for the highest employee number in the sector. The company was started in 1994 by Jeff Bezos, and it is currently headquartered in Seattle, Washington.

Additionally, Amazon is among those companies that hold the most expensive stocks. Yes, Amazon’s one share will cost you around $3000, making it giant in the revenue sector as well. People say that Amazon is more a retail seller than a tech company, yet the computing division of Amazon drives 15% revenue to the company making it a tech giant in every sense. Let’s not forget the fact that Amazon’s online shopping service is what the company proudly boasts about.

Recently, Amazon also stepped into cloud computing by launching its cloud computing platform, Amazon Web Service. The cloud platform is primarily designed for start-ups, government enterprises, academic solutions to establish their business online and offer them cloud storage, computing, and databases. Amazon Alexa was another groundbreaking launch from Amazon, which is today found in every household. There’s no reason why Amazon should not own a place on this list as each and every move of the company has brought goodwill and revenue.

You are probably wondering why Google has not yet arrived at this list. But little do you know that back in 2015, and Google reconstructed itself by giving rise to Alphabet Inc that today is the parent firm of Google and other former Google subsidiaries. The company was founded back in 1993 by Sergey Brin and Larry Page as Google. Later, Alphabet Inc was reconstructed from Google on 2 October 2015, making it a separate entity that owns Google. The conglomerate is currently headquartered in Mountain View, California.

Alphabet Holding currently houses more than thirty services and sub-companies, making it a tech giant in the world. It has a market capital of $1.02 trillion and an average revenue of $161.9 billion. The whopping share value of ($2000) Alphabet Inc makes it a giant competitor in the market.

Apart from being the parent company, Alphabet Inc has plenty of side projects as well, like the smart home project or Calico. The Android operating system was also one of the prodigies by Alphabet Inc. Google Venture Division comes under the authority of Alphabet that invests in start-ups, and uses Google capital for its long-term projects. There is no surprise that Alphabet Inc is one of the most trusted companies in the world.

Started as a social media platform by Mark Zuckerberg, Facebook is one of the fastest growing businesses in the world. It is a social media and online advertisement company that holds a market value of $764 billion. Initially, Facebook was designed for Harvard students, and later the membership extended to Ivy League universities and colleges in the USA. In no time, Facebook spread like wildfire and became a tech giant with its social media networking services.

The company was founded in February 2004 by Mark Zuckerberg. With constant hard work and innovation, Facebook has become the most expensive brand in the world. The company is currently headquartered in Menlo Park, California, USA. Over the years, Facebook has conquered many milestones that have bagged its massive recognition in the industry. The loyal fanbase of Facebook around the globe makes it a trusted social networking platform.

The social media platform currently has more than 2 billion visitors every day. In recent years, the company has showcased the intention to grow with more acquisitions. Today Facebook proudly owns plenty of tech projects like Instagram, Whatsapp, Messenger, Facebook Watch, and Oculus VR. The company has conquered many milestones in the past few years that have bagged it a reputed position in the market. In the future, we can witness some remarkable innovations created by Facebook.

The digital world is ever-evolving, and only these tech giants can make radical changes in it. The economic aftershocks of the pandemic cannot be ignored. Hence, there are plenty of reasons behind putting these companies in a top position.

Each company has something unique to offer that makes them earn high revenue and beat the competition. 5 Tips to Help Pay Off Your Mortgage Faster

4 Reasons To Perform A Property Valuation Before Selling Your Property

8 Ways To Improve Safety And Security Of Sliding Glass Doors